The growing craft brewery industry in Kelowna has become something to boast about.

For years, Kelowna been known for their world-renowned wine industry.  Although over the past few years, microbreweries are on the rise and making waves in the Okanagan.

Kelowna and surrounding area is home to over 20 craft brewery (microbreweries). 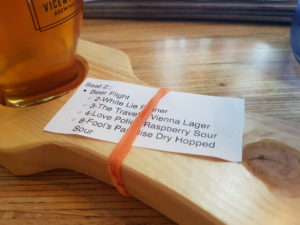 Here is a glimpse at a few popular Microbreweries

Founded in 1996, The Tree Brewing Company opened the doors to their Beer Institute in 2014.  Here they offer tours & tastings as well as a full menu.

Freddy’s Brewpub
Founded in 2000, Freddy’s has been a local favorite among other locally owned pubs.  Here they bowl and brew alongside the McCurdy Bowling center.

BNA
A newer brewery in Kelowna in one of Kelowna’s oldest buildings.  Located in the historic building originally constructed for the British North American Tobacco Company (which is where BNA got its name).  A great atmosphere to enjoy the selection of beers brewed right on site. There is a full kitchen along with bowling lanes and shuffleboard tables.

Elevation 57 Brewing
Canada’s highest brewery.  Located Big White ski resort, this unique craft brewery produces 12 craft beers.  Not only does it have a full kitchen, but they also have escape rooms for some fun after dinner.

Since 2017, 13 breweries have either opened doors or are set to open summer 2019. We have a craft brewery boom on our hands!

There are some great options if you want to tour these establishments.  A couple of local tour companies began offering craft brewery tours as early as 2017.

Both ahead of the curve, Beach Bum Tours is a local company and national Canadian Craft Tours branching out in the same year. Brew Crew Kelowna began offering craft brewery tours June 2019 quickly followed by Sage Brush Tours in Penticton.

Craft brewery tours have been popular for staff parties, bachelor & bachelorette parties and birthday.  Furtheromore, many tourists who visit Kelowna and are looking for something new after visiting our beloved wineries. This boost is a benefit to the local tourism economy and is welcomed by local businesses, especially those with connections to the industry.

Not only are these local businesses producing amazing microbrewed craft beer, but some of the craft brewery locations also offer either a full menu or lighter fare.

While Kelowna has always been known for amazing wines, Craft brewery is now on the rise.

So, beer lovers, maybe you will find your favorite new microbrew right here in Kelowna so give us a try!