As a part of our Kelowna home builders series, we look into the BC Step Code.  While this code is new to Kelowna, many cities throughout BC have already implemented these changes and building more efficient homes.

What is the BC Step Code?

The BC Step code is a 5 step provincial policy that ensures new homes are designed to be healthier, more efficient, and more comfortable. Each Step up, performance targets increase as homes must become more and more efficient & airtight.  It will be required that all homes be built with Net Zero efficiency by 2032. 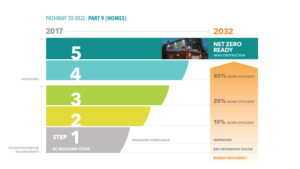 In May 2019, the City of Kelowna recently reviewed the BC Step Code to begin implementation and set the Step 1 implementation date to begin December 1, 2019. By December, Kelowna home builders are required to follow Step 1 for “Part 9 residential buildings” or single family homes.

Step 1 means Kelowna home builders must begin to understand energy consumption measurement and do airtightness tests. Step 5 means your new Kelowna single family home must be “Net Zero Ready” or airtight and energy efficient.  It is generally understood that renovations are more difficult for implementing the BC Step Code so it is focused on new builds, for now at least.

Local Kelowna home builder, Court Phillips of RedCourt Carpentry Kelowna, has worked in the lower mainland where each home built he built was tested for airtightness.

While there is a lot of technical talk, it boils down to efficiency.

RedCourt explains, “It’s about sealing the envelope up more, and putting in a proper HRV unit to push stale air out and pull fresh air in”.

This sounds pretty simple. Kelowna home builders can learn from Vancouver based companies who have already been building this way.  While Kelowna seems behind in this initiative they are ahead of many areas in BC.  This is the first step in making a difference.

How will Kelowna homeowners benefit?

While initial costs may be increased for construction, Kelowna homeowners will save on heating and cooling costs in the end.

Possible costs associated with the BC Step Code in building your Kelowna single-family home:

The City of Kelowna expects all new homes built after June 1, 2021 to be able to reach at least Step 3 of the program.  This will mean the homes built in just over 2 years will be at least 50% more efficient! The city is offering building permit rebates as an incentive.   In addition, Fortis BC is offering kickbacks to Kelowna homeowners for energy-efficient homes in Kelowna.

While initial costs of construction may increase, members of the construction industry agree that over time, high-performance HVAC designs, materials, and systems will more readily available.

RedCourt has been in the construction industry since the early 2000s when he began his apprenticeship. He completed his Red Seal Certification at the top of his group and has worked hard to ensure that every project he works on meets every building standard for both regulation and aesthetics. He has experience with an eye for detail!