Every time you drive down the Pandosy/Lakeshore stretch you are reminded that at one time Kelowna was just a sleepy beach town with small markets and beach access as far as the eye could see. Over the past few decades, the city has seen tremendous growth with new urban projects making many to consider a permanent relocation to this ever-growing city.

The Pandosy/Lakeshore area has always been regarded as the crown jewel of Kelowna. As we wait for the roadways to catch up, we are seeing new multi-family developments popping up regularly in this area. In the next two to five years the area as we know it will be even more different than remembered. With the onset of the redevelopment of Hiawatha RV Park, as well as the recently started Movala and soon to be constructed Aqua development near Truswell, it is apparent the changes are rapid, whether we are ready for them or not. From a perspective of growth and vitality, it feels somewhat exciting to watch the once sleepy beach town grow into a small yet vibrant city. It doesn’t come without a tinge of sadness for what Kelowna was and a hope that we can preserve the character of the agriculture, lifestyle, and beach life that many have come to know and love.

In 2008 we saw the addition of Playa Del Sol, a resort-style condo building that featured an outdoor pool and deck in one of the most sought-after locations just across the street from the famous El Dorado and Manteo Resort. Whether we were fully aware or not, the redevelopment of Lakeshore as we knew it had begun. 2015 brought The Lakeshore at Manteo, an 18-unit townhouse development with a pool on the lake; fast forward to 2017, Kelowna saw the highly anticipated completion of Sopa Square after many delays. The well captured artsy feel in the Pandosy/Lakeshore area is evolving to feature high-end living, a stone’s throw from the beach. 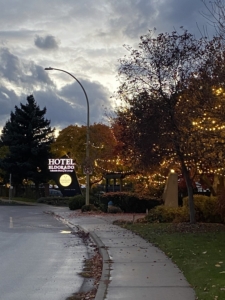 As residents begrudgingly try to make their way to and from Upper Mission the changes are coming fast and furious. Movala’s construction began after residents of the RV park enjoyed their last summer kitty-corner to Gyro Beach. Caban by Cressy will begin construction quickly although it is entirely sold out. Hiawatha RV Park has been removed and the giant open space will become rental only condos developed by Mission Group. A roundabout is being installed to help with the flow of traffic, disrupting it in the interim. As we near Truswell the wallscape speaks about the ingenious Aqua Boat Valet facility that is purely holding space for the upcoming multi-building Aqua development featuring three buildings and an indoor boat storage facility. It will also feature a new boardwalk which would bring new life to the existing boardwalk connecting the El Dorado and Manteo and hopefully more waterfront dining that is surprisingly scarce, given the size of the waterbody we are so lucky to reside amongst.

The implementation of the Resort District is unfolding all around us and brings mixed feelings for many and the resounding hope that we will be able to preserve the character of the once small farming and beach community while it transforms into a larger city. What do you feel about the transformation of Pandosy/Lakeshore?

About the author –  Shandel Rodrigue

Shandel’s passion for the real estate industry grew during her time in the banking sector as a Mortgage Advisor. She comes with extensive experience in administration, client care, and sales and truly enjoys keeping an office running optimally. In her personal time, she enjoys being as close to the water as possible as well as exploring the Okanagan valley with her loved ones.